On March 1 every year, the opening day of catch-and-keep season at Roaring River State Park brings together familiar faces fueled by tradition and a love of trout fishing. But as rods, reels and rushing water roll together in 2022, a new feature, backed by the local regional affiliate foundation, is providing successful anglers greater access and convenience while helping maintain the natural beauty of the popular state park.

A new fish-cleaning station, installed in 2021 at a cost of around $90,000, was funded by the Missouri Department of Conservation, Missouri State Parks and the Cassville Community Foundation, the latter of which contributed approximately $26,000 thanks to support from generous donors.

“More than 200 people from all over the country donated, from $25 to $10,000,” says Rachael Freeman, affiliate coordinator with the CCF. “There was a story with every donation.”

The CCF is the Community Foundation of the Ozarks’ regional affiliate representing the Barry County seat, near the southwest corner of Missouri. The state park, located just a few miles south of Cassville, draws more than a million visitors every year to fish for the plentiful rainbow and brown trout raised in the park’s hatchery.

Freeman says the need for the new station became obvious during the COVID-19 pandemic, when the previous one was closed due to lack of social-distancing opportunities. The closure tied to a subsequent series of events that eventually led to the old station’s removal — and negative ramifications for the pastoral setting, with no set place to dispose of fish remains.

“It was messing with the beauty of Roaring River,” Freeman says. “We’re a town that feeds off tourism. We wanted to do what we could to act fast.” According to the Missouri Department of Natural Resources, RRSP had 1.9 million visitors in 2021, the most of all Missouri state parks and historic sites. 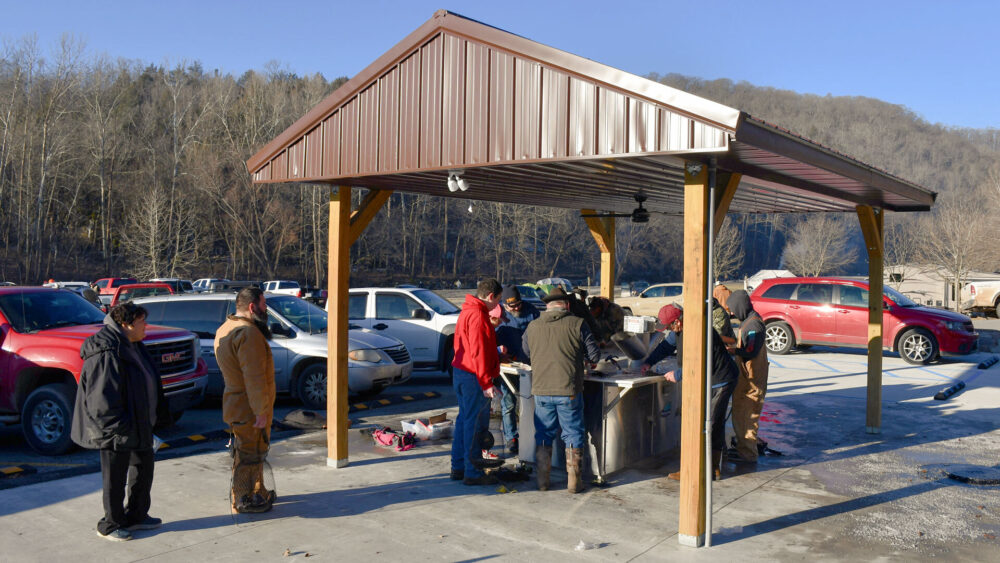 A “top-notch” focal point for park

The station was completed last June. Joel Topham, natural resource manager at RRSP, says the addition is something that visitors have come to appreciate.

“The fish-cleaning station has been a focal point at Roaring River for years,” he says, noting different iterations as it evolved. “Roaring River is just rich with tradition. People want the convenience of a fish- cleaning station here. So with the foundation’s help, we were able to get that station built.”

Topham describes the station as state-of-the art: It grinds fish remains into pieces small enough to be disposed of through the park’s wastewater system. He also notes that additional improvements will be made in the months ahead, particularly to divide the station into separate areas for greater ease of use. It’s also a major convenience and provides equitable access for visitors to the park, given that it is compliant with the Americans with Disabilities Act.

“It’s easier for people to stand around and fillet fish,” he says.

Following its completion last year, a grand opening was held for the new station.

“When we did the unveiling, people were lining up to use it,” says Freeman.

On the opening day of catch-and-keep trout season, it had a line of people waiting to use it, too. One of those people was Andy Riffle of Oklahoma, who regularly fishes at Roaring River, but “not as much as I want to.” He caught his limit in around 30 minutes.

“It’s nice — it’s definitely pretty top-notch,” he says of the station. The best part, in his opinion? “You don’t get shocked when you plug in your electric knife.” 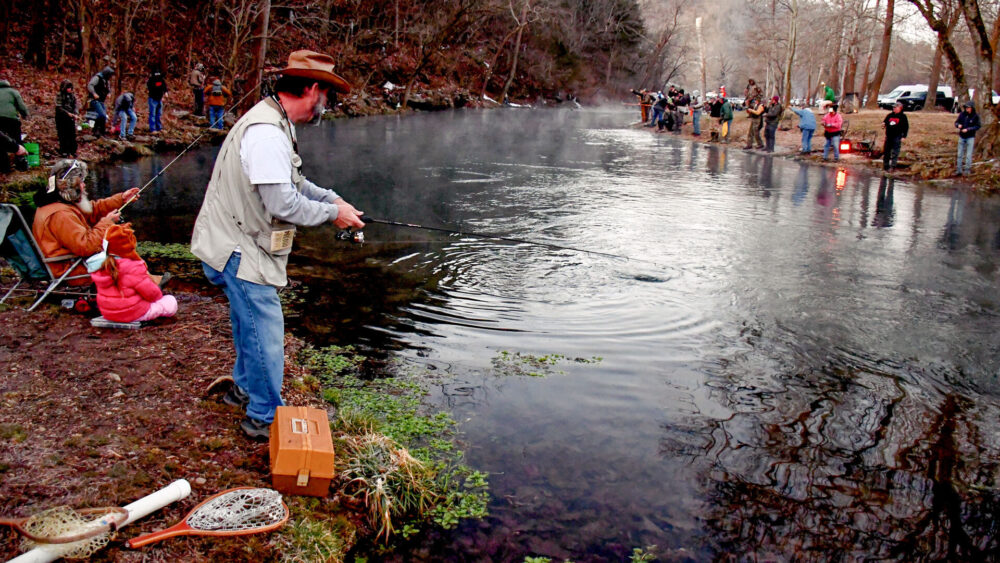 The opening day crowd of catch-and-keep trout season on March 1 is a widely cherished Ozarks tradition.

Riffle was one of many who headed to the park on opening morning, representing a tie to the traditions of which Freeman and Topham both spoke.

The young-yet-seasoned angler doesn’t say exactly why he loves coming back, but proof is on the stringer: He pulls it up to show two trout he already caught.

On another section of the stream, another memorable moment comes when Michael Knight catches his first fish. Knight’s interest in fishing goes deep: He notes he owns a fly shop in Kansas City, and also is a fly tyer and designer.

“And he tells pretty good fish stories,” says his friend, Ruth Franklin, who joined him in a morning spent at the river.

“Yeah, like this one …,” Knight says, as the fish flops and falls out of his hands.

“... the one that tried to get away,” finishes Franklin.

“The park has always been about more than just fish,” Freeman says, noting that the station plays more than simply a literal role for those that visit the park year after year. “It’s not just about the fish. They’re preserving their memories.”