For All to Play

It’s not unusual for Lucas Fritsche to be recognized around Perryville, where the eighth-grader lives with his family on a farm just outside of this city near the Mississippi River on Missouri’s eastern border. Recently, though, he’s also hearing congratulations for being honored by the Perry County Community Foundation as its 2021 Humanitarian of the Year.

For nearly half his life, Lucas has led a community movement — one he launched when he was 8 — to build the town’s first all-inclusive playground. With help from his family, a supporting “Lucas & Friends” committee, community members and leaders, local businesses, and the PCCF, phase one of Lucas & Friends Backyard Adventures Playground officially opened with a ribbon-cutting in late October. Along with the Humanitarian honor, the PCCF presented Lucas with a check for $1,000 toward the playground.

PCCF Chairperson Angela Swan told Lucas at the presentation that he accomplished more in his young life than many adults do over decades. Not only did he inspire a community of 8,000 to donate more than $500,000 to build the playground, his efforts educated an entire town about the challenges faced every day by kids with special needs.

The PCCF chose Lucas for the honor, Swan says, “because of his leadership and ability to inspire an entire community to come together — $500,000 dollars was a large amount of money for a community like ours to support a project. So, it’s just really exceptional he could do that, and do that at his age.”

The project started with a simple question when Lucas, who has a diagnosis of autism, was in second grade: Why didn’t his friend play on the school playground at recess? When his friend, who uses a wheelchair, told Lucas he couldn’t use any of the equipment, it ignited a spark. “I scrammed right into my principal’s office,” Lucas recalls, “and said, ‘Why couldn’t my friend not play on all the playground materials?’ And she said, ‘Well, we don’t have all that stuff that people can play as much.’ So, I said, ‘Why can’t we just build it?’” 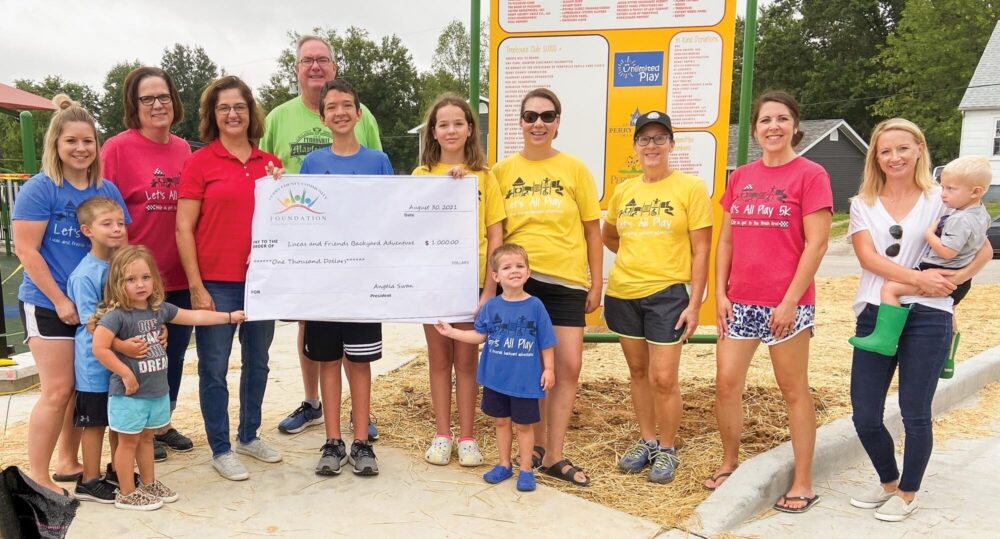 Lucas Fritsche, in blue behind the presentation check, was named the Perry County Community Foundation’s 2021 Humanitarian of the Year for his leadership to build an all-inclusive playground in Perryville. After a six-year effort, Lucas & Friends Backyard Adventures Playground opened on Oct. 30.

The principal suggested Lucas take his idea to the school’s parent organization, Parents Involved in Education. With his parents’ help, Lucas made an enthusiastic presentation and asked for PIE’s support. “They were super excited to help. It was very inspirational,” says Jennifer Fritsche, Lucas’ mom. The board agreed to help raise funds and, with the passage of a tax bond, the superintendent agreed to make improvements to the playground.

From there the concept snowballed. The mayor heard about it and asked Lucas to help build an inclusive city playground on land the city donated. Although the project was ultimately accomplished through Unlimited Play, a St. Louis nonprofit that builds inclusive playgrounds, donations rolled in from the start with nowhere to go. So, the Fritsche family spoke to the PCCF about starting a fund, nicknamed Fun for All, to properly collect the tax-deductible donations. “Instead of waiting to get a 501(c)3 and all that extra red tape, we were able to then start accepting those checks immediately,” Jennifer Fritsche says. “It was seamless. And we had a fundraiser coming up, so we were able to run all that through the community foundation.”

Starting the playground fund with the PCCF was a perfect match with the foundation’s mission, Swan says, which is to improve life in Perry County through aesthetics, culture, education and leadership. “Founding a fund with us gives you the opportunity to have an idea and run with it,” Swan says. Starting a 501(c)3 can be intimidating and time consuming. Establishing a fund with the foundation is a one-page form. “You fill it out and you’re done,” she says. “And you’re ready to go focus on the creative process versus the paperwork process.”

This continues a focus of the PCCF to establish funds to support community projects. In addition to the playground, PCCF funds have helped the Hope Therapeutic Horsemanship Center, the Perry County Military History Museum, the American Tractor Museum and the Missouri National Veteran’s Memorial, a full-size replica of the Vietnam Memorial in Washington, D.C., to name a few.

The PCCF also gives away two grants totaling $2,000 a year, with $1,000 going to a project connected to the selected Humanitarian, says Swan, who has been chairperson for the last two years. The $1,000 grant in honor of Lucas will go toward the playground’s second phase, which needs $180,000 for additional playground pieces. Jennifer Fritsche says the PCCF fund could help with playground maintenance and eventually lead to other projects.

Asked how he feels to see his inclusive playground idea come to life six years after speaking out for a friend, Lucas lights up. “It’s kind of amazing,” he says.