The 2021 Humanitarian Award recipient is credited with impacting thousands of lives by sharing infectious-disease expertise.

Dr. Robin Trotman, D.O., is the 36th recipient of the Humanitarian Award, which honors those who have dedicated their lives to others. The CFO presented Trotman with the 2021 Humanitarian Award at the Association of Fundraising Professionals-Ozarks Region Chapter’s National Philanthropy Day celebration in November.

Trotman’s integrity and sacrifice make him the right choice for the 2021 award, says CoxHealth President and CEO Steve Edwards, who nominated Trotman and who received the award in 2020. Since early 2020, Trotman has spent countless hours helping CoxHealth care for more than 4,800 patients with COVID-19. As the infection prevention medical director for CoxHealth, he guided the hospital’s Incident Command team and has helped educate the community about the realities of COVID-19. “He was relentless in helping us understand how to prepare,” Edwards says. “Our efforts were led by his understanding of science, and I think that impacts our whole community.”

That community impact describes the late Jewell Thompson Schweitzer’s intent when she founded the award in 1990 to honor individuals in our region who excel at serving others in a humanitarian capacity. A committee formed by the Springfield Area Chamber of Commerce selects the annual recipient. This year’s committee included: Rev. Kenneth Chumbley; Tim Connell; Pastor Saehee Duran; Lyle Foster, Ph.D.; Brandy Harris; and Rev. Phil Snider.

Trotman’s work also had state and federal impact. For months, Trotman participated in weekly calls to advise Missouri Gov. Mike Parson and other leaders on strategies to keep the public safe. And he helped prepare the “Great Clips” study that details how masking prevented local stylists, who tested positive for COVID-19, from passing the virus to others. It has been referenced worldwide, Edwards says, since being published in the Centers for Disease Control and Prevention weekly journal. 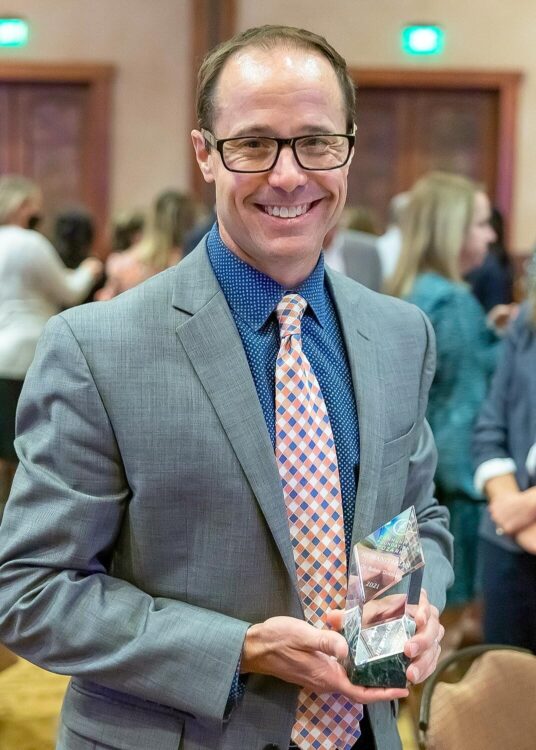 Trotman recalls the pandemic’s early months as hectic and chaotic. “Everything felt deficient, whether it was supplies or time or staff. And we were doing that in a vacuum of medical knowledge,” he says. Developing protocols and policies for handling a pandemic has been an unparalleled experience, Trotman says, especially when medical experts are questioned and even threatened by some for following the science.

He’s grateful to be surrounded by colleagues who daily share knowledge and expertise. That’s why it was with humility and some reluctance that Trotman accepted recognition for work he considers a team effort. “He didn’t want to stand out because he knows so many people were involved,” Edwards says. “But I know firsthand that he exemplified what leadership our committee needed.”

Trotman has worked at CoxHealth for 16 years. He received his bachelor’s degree from the University of Texas–Austin; completed medical school at Kirksville College of Osteopathic Medicine in north Missouri; and completed his internship and residency work at the University of Missouri–Columbia. Considering Trotman grew up in Texas and did his fellowship in infectious disease at Wake Forest University in North Carolina, Edwards says the community is lucky he settled in Springfield. “I will never be able to quantify and qualify it, but thousands of lives were impacted positively,” Edwards says.

As part of the Humanitarian honor, Trotman received a $5,000 cash award. He donated his award to Parasites Without Borders, an international organization focused on eliminating human suffering due to parasitic infections.

Trotman says the pandemic has taught him to be a better listener and communicator. And he hopes to impart to students he mentors that serving and caring for others is a responsibility and a privilege. It’s especially meaningful that the award committee recognizes the kind of work he and others do, he says: “To see it through a lens of humanitarianism is really special,” he says.