Living history is found at the end of Pine Street in Niangua, where a stately brick school links past and present. It came to be in 1934 when several rural schools consolidated in the northeast Webster County community, and the Niangua district needed more space.

It was a busy time for the small town, brought by the railroad after the end of the Civil War. Trains still run through Niangua, but now it’s time that has brought change. In a place that once had many businesses — including a hospital — the school is one of few institutions keeping the town’s heart beating today.

A mural on the main drag speaks to its importance: “The school should be the focus of the community,” it reads. 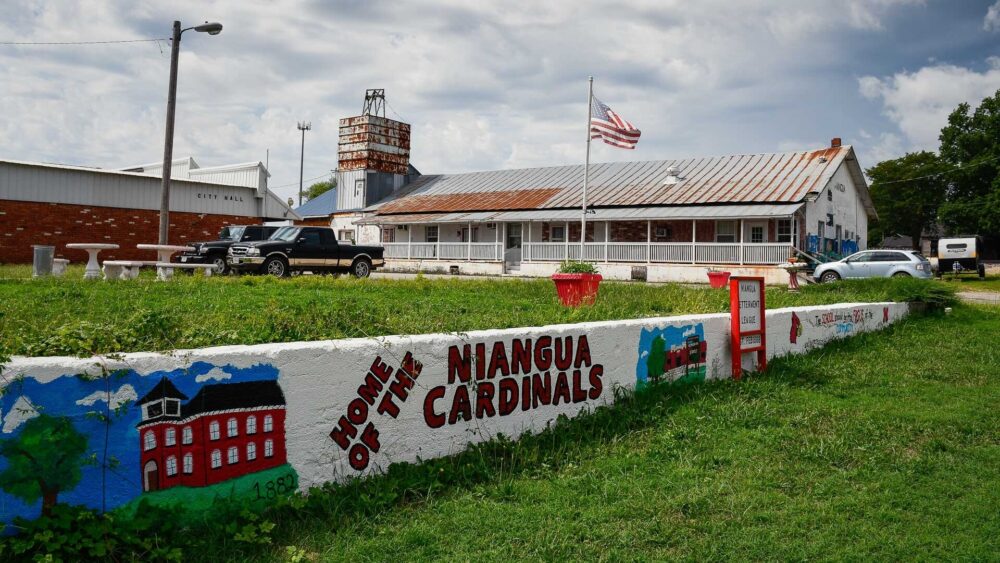 A mural in the center of Niangua affirms the school district's role in community life.

While the school continues to serve — and for some, offer a sense of stability — one way it helps set students up for success is through vision and hearing screenings. Due to limited resources, however, the district has made do with equipment that was difficult to use and didn’t work as it should. There just weren’t the funds available to replace it.

The school district recently obtained new equipment to test students’ hearing and vision through a $5,000 grant, one of 21 distributed to local school districts for mental and physical health needs by the Louis L. and Julia Dorothy Coover Charitable Foundation and the Community Foundation of the Ozarks. 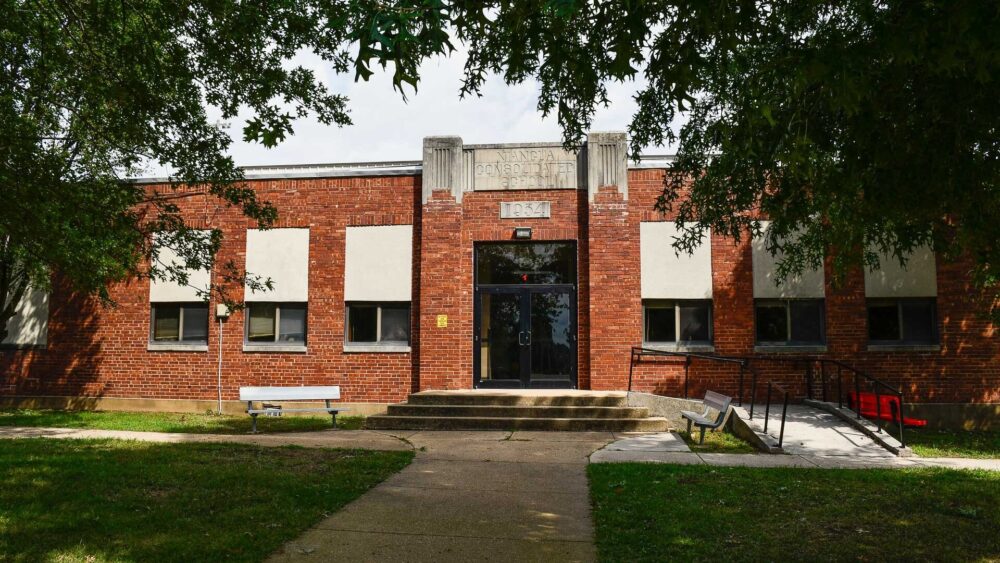 The Niangua R-V School District recently received a $5,000 grant from the Coover Charitable Foundation for new equipment to test students’ hearing and vision.

How the equipment will help students

Screenings at school don’t only fulfill a requirement. They have a real ability to affect students’ quality of life. Vision and hearing issues can have adverse effects on educational and social development.

“Most of these kids don’t go to a physician,” says Julie Shadwick, nurse for the Niangua R-V School District. “This is their first screening for any kind of deficit for any age.”

If concerns are detected, then information is passed along to parents.

“What we can do at that point is make a referral to the parents and say, ‘It looks like they’re having a little trouble. You need to get them in,’ and then just keep following up and hope that they can get them in and get them tested.”

Shadwick says around 80 students will be immediately impacted by the equipment. She tests all students in pre-K through third grade annually, as well as students with an individualized education plan. She’d also like to eventually expand screenings to middle schoolers.

Ultimately, the equipment could impact any of the district’s approximately 350 students.

Shadwick, who is in her second year at Niangua, left a career with a local health system to serve at Niangua, where her family has roots. Upon arriving in Niangua, she found that the previous screening equipment and systems posed significant challenges.

“This is just hearsay, but I was told that one of the nurses before me bought the old one off of eBay,” she says of the audio screening system. “The headsets, I guess, never worked. One side only worked, so they would have to flip it over on the kid. I could never get it to work properly with the headphones and you can’t switch out headphones. They have to be calibrated to this machine.”

Another challenge tied to younger students, who didn’t always understand what the system — which was based on tones — was asking from them.

“It was very hard for little ones to discern what you wanted them to do,” Shadwick says.

The new system integrates sounds corresponding to a chart of kid-friendly images, such as a hot dog, an ice cream cone, a rainbow and a firetruck.

“It’s for kids that don’t know the alphabet and kind of have a hard time following directions,” Shadwick says. “It goes through in different decibels and asks them to point to the symbol. It’s so much easier for younger children to do this.”

The vision screening system, too, had its challenges. The district used the Snellen Eye Chart — think of the chart of Es in different directions and sizes — but it only tested for near-sightedness. The new system tests for that, but also for far-sightedness, color-blindness and if students’ eyes are wavering.

“A lot of kids’ eyes do that,” Shadwick says of the latter condition. “It’s called nystagmus, and it will pick that up. It will pick up if they have a lazy eye, and one is not getting the same perception as the other one. They can correct that with glasses.

“The equipment just does a lot wider range than just doing the Snellen chart where we’re saying, ‘What’s the letter here?’” 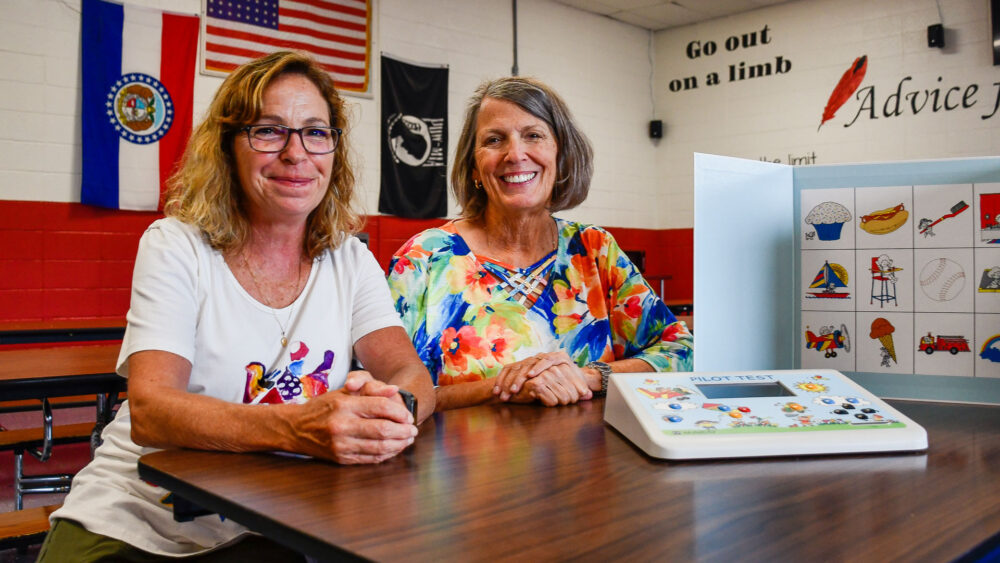 In 2002, the district was in danger of closing when it nearly lost its state accreditation. While the reality was based on a number of factors such as college placement, dropout rates and attendance, it largely tied to standardized test scores.

After intense work, the school’s accreditation and future were reinstated. But while a sign out front proudly notes that the school has been accredited with distinction at least four times since 2008, challenges still exist.

The area’s median income is $32,727, according to the U.S. Census Bureau and the 2020 American Community Survey. The data also shows that the community has an employment rate of 42.3%.

In an area with extreme poverty, the school becomes a crucial support system for students and the community. It’s also an area of opportunity to help students and staff.

That’s one place Judy Aswad wanted to help. A former teacher, Aswad moved to the area around 10 years ago from Texas. With time and energy on her hands, she wanted to help.

“Being a teacher from many years ago, I had to do something,” she says.

Aswad eventually became connected with Niangua TLC, a nonprofit organization that began around six years ago to support the school.

“The first meeting, I was voted co-president,” she says.

Niangua TLC exists to help underprivileged kids “have the same experiences as everybody else in the state,” Aswad says. “Our group kind of makes sure that we fill in whatever holes we can find.”

Examples of that work come in Shadwick’s office, where the women look into a supply closet to see where gaps exist in a collection of hygiene items such as toothpaste and feminine products. Niangua TLC helps with those items, as well as clothing, additional hygiene supplies, and food, if the latter is necessary. 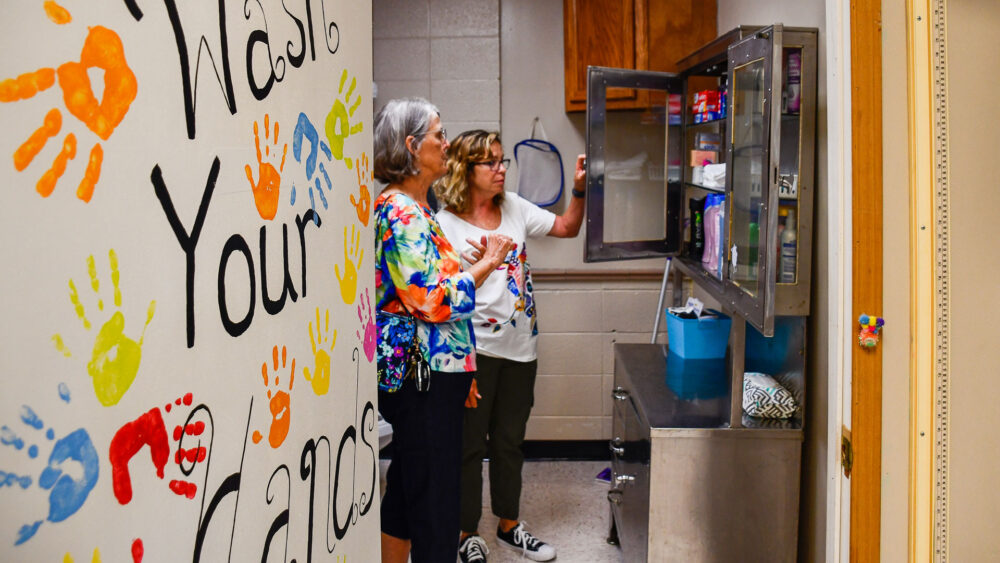 Aswad and Shadwick take inventory of hygiene supplies that are given to students in need.

It also translates to applying for grant funding when there are opportunities, like the recent Coover/Rural Schools Partnership program.

“When I found out what they were using before, I was appalled,” Aswad says of the school’s vision and hearing equipment. “1960s — that’s what I used.”

“We went ahead and applied to the CFO, and (the organization was) so gracious to give this to us. We’ll be using it right away.”